Canadian Immigration Strike is Over

The foreign service officers have ended their strike after reaching a tentative agreement with the Canadian government.

This is good news for many international students, workers and others who have been in limbo, waiting for their visas to be processed. 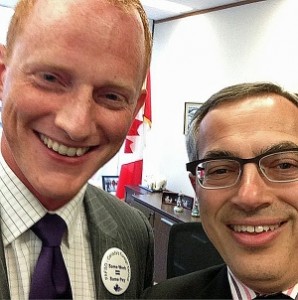 Treasury Board President Tony Clement, right, posted this “selfie” photo on Instagram after he and PAFSO president Tim Edwards, left, “signed a deal that is good for taxpayers & FSOs.”

The agreement between the union representing foreign service officers and the Canadian government effectively ends one of the longest strikes in the federal public service.

As according to the CBC:

New pay steps have been added to two of the salary bands, or ranges, with another band having the lowest two steps deleted, so employees in that band start at a higher wage.

The wage gap between the more junior FS-02 level of foreign service officers and the same level of commercial officers, who had been earning more, is eliminated, with two new pay steps added. Those workers will get 4.5 per cent increases per step up through the pay scales, rather than four per cent.

The gap between the FS-02s and two competing groups, the commercial officers and economic officers, is small enough “to be considered ‘at equivalent level,'” the union said to its members.

The wage gap between the more senior FS-04 level and the most junior level of public service executives is eliminated with the addition of one new pay step, the union told its members, putting the foreign service officers $875 higher at their maximum level.

The mid-range FS-03 level of foreign service officers are losing their two lowest pay steps in the range, bringing the new starting rate for the salary band to $86,604.

On September 13th, the Public Service Labour Relations Board ruled that the federal government had been bargaining in bad faith in its negotiation with striking diplomats:

Once the respondent entered into a negotiation of the conditions under which the determination would occur, it was under the obligation to bargain those conditions in good faith and to make every reasonable effort to conclude a collective agreement – the respondent’s actions had breached that duty – it knew or should have known that the conditions could not have been accepted by the complainant as they would have precluded the complainant from putting forward its argument to the decision maker and would have predetermined the outcome – that was unreasonable and contrary to section 106 of the Act – the respondent had crossed over from hard bargaining to surface bargaining – the respondent had engaged in bad faith bargaining

As expected, critics of the government were ready to weigh in with their thoughts. NDP Foreign Affairs critic Paul Dewar:

“Canada’s international presence depends on the patriotic dedication of our talented foreign service officers. Our diplomats take on personal risk and hardship in being posted abroad — they deserve our respect and gratitude for their service to our country”

Now that that the strike is over, the foreign service officers will be working hard in order to speed up processing of the applications that have been increasing in the backlog.

2 Responses to Canadian Immigration Strike is Over