Canada Among Most Welcoming Countries to Foreign Visitors 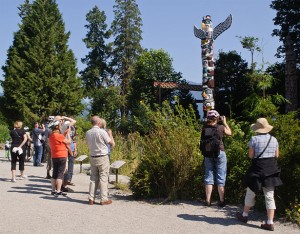 Tourists visiting Stanley Park, one of Canada’s most popular tourist spots. Canada was found to be the 12th most welcoming country in the world to foreign visitors in a World Economic Forum study on the global Travel and Tourism industry (Rachel K. So)

A new travel and tourism study from the World Economic Forum (WEF) ranks Canada as one of the most welcoming countries to foreign visitors, ahead of the United States and most European countries.

The rankings, revealed by Max Fisher in a Washington Post story, can be found in a 400-plus page WEF analysis on national tourism sectors around the world.

According to the WEF’s Executive Opinion Survey, the most welcoming country in the world to foreign visitors is Iceland, followed by New Zealand. Canada is 12th out of the 140 jurisdictions included in the survey.

Among the countries most welcoming to foreign visitors, many are island-nations, have small populations, and are not heavily militarized.

Canada, with its modest 35 million population, small military, lack of significant foreign threats, and long shoreline, shares many of these characteristics.