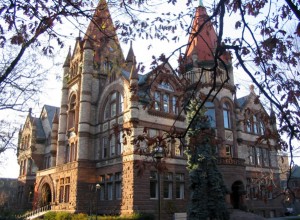 'Old Vic' at the University of Toronto (U of T). The U of T was one of the few Canadian educational institutions perceived as a world class post-secondary institution by survey participants in China, India and Brazil

A Foreign Affairs department commissioned study completed in March finds that Canada is not seen as a top destination for prospective international students in Brazil, China, and India.

The sobering Ipsos-Reid report says that “Canada is a not top-of-mind destination for foreign study for participants in any of the three countries except with Brazilian participants interested in language studies” and that “there is no awareness that Canada has world-class educational establishments”.

Despite the poor survey results, Canada attracts nearly 100,000 international students every year, who contribute an estimated $6.5 billion annually to the Canadian economy.

There have been several high-profile calls on Canadian post-secondary institutions and governments this year to build on this success and increase Canada’s share of the international education market.

The federal government has heeded the calls and made efforts to promote the Canadian education brand, as reported by a Globe and Mail article on Tuesday:

Initiatives designed to forge educational links have been a feature of Prime Minister Stephen Harper’s strategy to deepen economic ties with Asia during his trips to China and India this year.

Meanwhile, Governor-General David Johnston travelled to Brazil in the spring with 30 university presidents in tow, one of the biggest delegations abroad to push the benefits of Canadian education.

The Ipsos-Reid study recommends that the federal government improve the “Imagine Education in Canada” campaign, which it promotes internationally.

Specifically, it says the campaign should provide more information on the advantages of Canadian education to foreign students, like the global school ranking of Canadian post-secondary institutions, the top majors offered, and famous/successful people who have attended Canadian universities.

It also recommends advertising the practical advantages of living in Canada, like the high standard of living, good value for money, and the natural beauty of the country.