Canadian Diplomats Around the World Walk Off Job In Strike 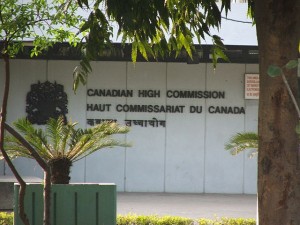 The Canadian High Commission in New Dehli, India. The walk out by Canadian diplomats will affect visa and permanent resident application processing in 12 Canadian missions around the world, including in India and China (Wikipedia)

Canadian diplomats stationed in 12 missions around the world walked off the job on Thursday in a dispute with the federal government over compensation.

The diplomats are members of the Professional Association of Foreign Service Officers (PAFSO), a union and professional association representing foreign service officers working for the Department of Foreign Affairs, Trade and Development (DFATD) and Citizenship and Immigration Canada (CIC).

PAFSO is demanding a wage increase, saying its members are paid less than other employees of the federal government. The Globe and Mail provides an example of the difference in division salary schedules that PAFSO is protesting:

For example, an experienced foreign service officer on the level-2 pay scale makes about $83,000 a year, which would increase to about $87,000 under the Treasury Board offer, Mr. Edwards said. That would still be about $11,000 less than the salary of employees at the same level in the commerce division.

A spokesman for the federal government disputed the claim in a response to the Globe and Mail, saying foreign service officers receive other benefits that bring their total compensation up to the level of other public servants:

Mr. Conway added that foreign service officers receive additional benefits, including partial reimbursement for dry cleaning, help in shipping household belongings, a vehicle abroad and an incentive allowance for working outside the country.

Foreign service officers abroad can receive a “foreign service premium” of $6,600 to $31,300, depending on their seniority and the number of dependants accompanying them on a posting. A smaller, post-specific allowance is meant to help diplomats with the cost of travel.

The walk-off puts the federal government in a difficult spot, as much of its foreign operations, including Prime Minister Stephen Harper’s upcoming trip to Europe for the G8 summit, are dependent on foreign support staff.

Also affected will be visa and permanent resident application processing in large Canadian visa offices, including the ones based in China and India.