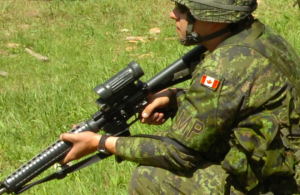 The Canadian Forces are facing a challenge in recruiting enough minorities from mostly immigrant groups, according to a story in politics.ca.

Author Colin Horgan notes that among Asian and Arab-Canadians, the interest in careers in the military is low:

When Ipsos Reid asked non-Chinese Asian- and Arab-Canadians what line of work they might be interested in pursuing or would recommend to a younger person, no more than one per cent of those polled said they’d look for a job in the military.

Further, when asked which career they’d be least interested in pursuing, Ipsos Reid found “the military tops the list.” Thirty-one per cent of Asian- and Arab-Canadian youth (and 25 per cent of those polled from the community) told the polling firm that a career in the military would be of least interest to them, “followed distantly by other fields.”

The Ispsos Reid report on the survey states that the DND is seeking to increase the representation of this demographic in the armed forces in order to “comply with Employment Equity (EE) Act requirements and ensure operational effectiveness”.

In 2010, the Armed Forces set a target of visible minorities making up 12 percent of its personnel in 2013, but nearly three years later, it is only at 5 percent.

The Canadian Armed Forces also struggles to recruit Canadian Aboriginals, which contrasts with the experience of the US military, where Native Americans have the highest per capita enlistment rates of any ethnicity in the country.

This entry was posted in canadian immigration, Canadian military, public opinion and tagged Canadian Armed Forces, minorities in the military. Bookmark the permalink.