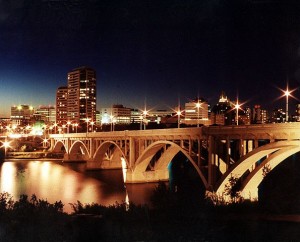 Saskatoon’s famous Broadway bridge at night. A recent Conference Board of Canada report finds that for each additional 481 immigrants in Saskatchewan, there was an increase of $30 million in imports and $41 million in exports at the provincial level (Jay Van Doornum)

A new report by the influential Conference Board of Canada finds that immigration contributes to diversifying trade in provinces. The study looked at the relationship between immigration in the province of Saskatchewan, and the countries which Saskatchewan traded with.

It found that in Saskatchewan, having resident immigrants from a particular country was linked, at the provincial level, to more goods being exported to and imported from that country.

Looking at trade data from the years 2007 to 2011, the researcher found that “Saskatchewan is more likely to import goods from countries that have an increased immigrant presence in the province, regardless of the relative wealth, presence of a trade office, distance, or language spoken in that country”.

The report proposes increasing immigration to create stronger trade links with the BRIC countries (Brazil, Russia, India and China) and other countries outside North America, in order to diversify the sources of Canada’s economic growth and increase trade.

This entry was posted in Canadian economy, canadian immigration, Saskatchewan, Saskatchewan Immigrant Nominee Program and tagged Conference Board of Canada, immigration and trade, Michelle Parkouda, The Influence of Immigrants on Trade Diversification in Saskatchewan. Bookmark the permalink.