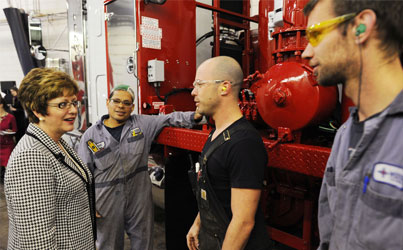 In a visit to the Alberta manufacturing facility of Advance Engineered Products on Wednesday, Human Resources Minister Diane Finley announced the federal government’s update to the Temporary Foreign Worker Program that speeds up the process of acquiring work permits.

Before a foreign worker can receive a work permit in Canada, their Canadian employer/sponsor must get a Labor Market Opinion from Human Resources and Skills Development Canada (Services Canada) that states that the employer made a significant effort to hire a Canadian and was unable to, and that hiring a foreigner would not have a negative impact on Canadian jobs.

Currently, Labor Market Opinions take months due to red tape. In Wednesday’s announcement, a new Accelerated-Labour Market Opinion (A-LMOs) was introduced, which allows qualifying employers to get a fast-tracked Opinion in 10 days.

Employers who have a record of following the rules on hiring foreigners are eligible to receive A-LMOs for those they sponsor, but if they break the rules, Ms. Finley said they will be suspended from sponsoring foreigners for work permits for two years.