Immigration Canada Announces That Over 100,000 International Students Entered Country in 2012 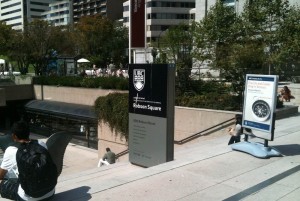 UBC campus in downtown Vancouver. The number of international students entering Canada has increased by 60 percent from 2004, to over 100,000 last year (CICS News)

Canada admitted over 100,000 international students in 2012 according to an announcement by Citizenship and Immigration Canada (CIC) on Tuesday. The number marks a 60 percent increase over the number of foreign students hosted by Canada 2004, and demonstrates the growing significance of international education to the country.

In another report, commissioned by the Canadian Council of Chief Executives and released last summer, the author of the report, University of British Columbia President Stephen Toope, argued that in addition to the direct economic contribution foreign students make to Canada through their spending on tuition, rent and other living expenses, they also benefit the country by creating economic and cultural links between it and other countries.

Toope wrote that those links would enable Canada to conduct more international trade and investment with rapidly growing economies in the future, particularly in Asia where many of the international students originate.

In a statement on Tuesday, Citizenship and Immigration Minister Jason Kenney extolled the trend of an increasing international student population in Canada: “Attracting and retaining the best and brightest immigrants from around the world is part of the government’s commitment to grow Canada’s economy and ensure long-term prosperity.

The steady growth in numbers confirms that Canada remains a destination of choice for international students because of the remarkable educational opportunities that exist in our world class institutions.”