Iranian Immigrants Being Singled Out For Extra Scrutiny by Canadian Government 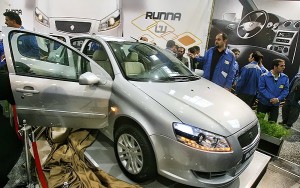 Iran's largest car manufacturer, Iran-Khodro, is one of the hundreds of companies sanctioned under Canada's Special Economic Measures Act (SEPA). An employment history with the firm can potentially cause difficulties for Iranians seeking to immigrate to Canada.

Immigration Minister Jason Kenney said this week that Iranians applying for immigration to Canada are being “rigorously” screened by the Canadian government for links to the Iranian political leadership.

Kenney cited the Immigration and Refugee Protection Act (IRPA), saying it bars any one linked to “the Iranian Revolutionary Guard … the Basij or senior members of the regime” from immigrating to Canada.

This week the Harper government placed Iran and Syria on its list of state sponsors of terrorism, and section 34 of the IRPA which Kenney referred to deems members of organizations believed to be engaged in terrorism to be inadmissible to Canada.

Prominent Iranian-born human-rights activist and former Miss Canada Nazanin Afshin-Jam, who is married to Canadian Defence Minister Peter MacKay, said in July that the Iranian embassy in Ottawa should be shut down, saying it “has no purpose here” and is used to spread “propaganda”.

The Harper government has heeded their calls and put in place two rounds of sanctions against Iran, in July 2010 and November 2011, as well as shutting down the Iranian embassy in Canada and the Canadian embassy in Tehran and putting Iran on its list of state sponsors of terrorism this week.

The punitive actions have affected many with no links to the regime however. The closure of the Iranian embassy in Ottawa this week left thousands of Iranian students without consular services in Canada and no where to turn to receive them.

Likewise, Canadian economic sanctions, ostensibly put in place to prevent the Iranian government from funding its nuclear program, resulted in a major Canadian financial institution, TD Bank, shutting down the bank accounts of over 100 Iranian-Canadians.

For Iran’s professional class, avoiding employment at firms with links to the Iranian government is nearly impossible in some cases, as Iran’s government and Revolutionary Guard have major stakes in almost every large commercial entity in the country, so the effect of these sanctions is to prevent many of Iran’s best and brightest, who have no political links, and are seeking a better life in a new country, from being able to immigrate to Canada.

Would-be Iranian immigrants have also been facing extra difficulties in the immigration process due to the effects of financial sanctions imposed last year, which require any one wanting to send their money from Iran to Canada to first acquire a special permit from the federal government that can take any where from four to eight weeks to issue.