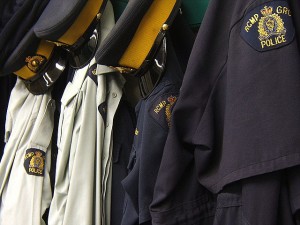 The RCMP investigation into the alleged 'marriage of convenience' fraud has now moved to the stage of laying charges. (Vince Alongi)

The RCMP laid charges against 39 people on Tuesday for their part in a marriage scam involving Canadian women marrying North African men and sponsoring them for Canadian permanent residency, in exchange for money. The RCMP investigation has so far uncovered 315 marriages, involving over 600 people, that it believes to be fraudulent, and it’s possible more people will be charged in the future.

The group arrested on Tuesday are having a total of 78 charges laid against them, including for misrepresentation and procuring feigned marriage. The alleged organizer of the scam is unlicensed immigration consultant Amado Niang, who was indicted on 42 counts.

He allegedly found Canadian women, many of Haitian descent, and offered them an arrangement whereby they would get paid to marry men from North African countries who were in Canada and had visas that were close to expiry. Mr. Niang appeared in court in Montreal on Tuesday and has another hearing scheduled for October 23rd.

Project Conjugal, the RCMP investigation that led to the charges, began in 2009 with the purpose of investigating suspicious marriages that took place between 2007 and 2009, and lead to the dismantling of the alleged criminal organization behind the scam in February. The purpose of the investigation is now to lay charges against those allegedly involved.

In an effort to reduce marriage sponsorship fraud, the Canadian government this year changed spousal sponsorship rules to bar a sponsored spouse from sponsoring a new spouse for at least five years after they are granted permanent residence.

The Department of Citizenship and Immigration has also proposed that Canada adopt the US-style sponsonship process of granting sponsored spouses a two year ‘conditional resident status’, after which they can apply for permanent residency if they have met all of the conditions required of them, instead of the current process of granting permanent residency to sponsored spouses immediately upon their arrival in Canada.