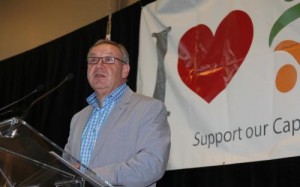 International students studying in Canada provide a significant economic boost to communities across the country, including several in Nova Scotia, through the spending money they bring with them.

A report done last year by University of British Columbia President Stephen Toope for the Canadian Council of Chief Executives found that international students contribute $6.5 billion a year to the Canadian economy.

Dexter warned that this could be jeopardized by the foreign service officers strike, as universities in the U.S. will be more appealing to students wishing to study abroad if they are unable to get their Canadian student visas quickly:

“If you’ve got five universities on your radar and two of them are in Canada and three are in the United States and you get your visa into the United States in three days then when you are trying to plan for the future if you have to wait two months before you know if you’re even going to get a student visa it makes it a heck of a lot more likely you are you going to choose one of the three options in the U.S.”

The premier says the provinces should urge the federal government to escalate the labour dispute in order to resolve it, which most likely would lead to a court ordered end to the strike.