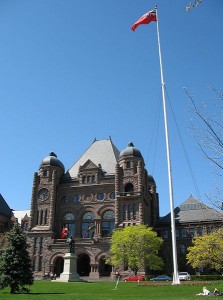 The Ontario legislature, pictured above. Ontario’s provincial government has announced increased funding for immigrant-serving organizations in the province in an effort to help new immigrants find employment and adjust to life in Canada

The funds will be provided to the Newcomer Settlement Program, which supports 98 organizations that the provincial government says help 80,000 newcomers settle and find jobs in the province.

The Ontario government has been seeking to find ways to help immigrants improve their employment situation and income after findings showed Ontario has one of the largest income and unemployment gaps between new immigrants and the general population in Canada.

Increasing access to settlement services was one of the targets included in the province’s recently published immigration strategy.

Since 2003, the Ontario government has increased funding to settlement programs by nearly 80 percent. Nearly 40 percent of Canada’s immigrants settle in Ontario.

This entry was posted in canadian immigration and tagged Newcomer Settlement Program, settlement. Bookmark the permalink.