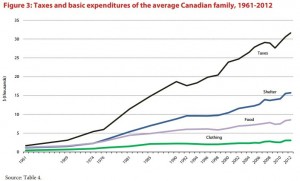 Two Canadian economists say taxes are rising faster than wages for typical Canadians, and that the average Canadian family now pays a greater share of their income in taxes than on basic necessities.

The report, by Milagros Palacios and Charles Lammam, was released as part of the 2013 edition of the Canadian Consumer Tax Index.

The index tracks the total tax bill of the average Canadian family from 1961 to 2012, and finds that while taxes to all levels of government have increased 1,787 percent since the beginning of the period, spending on shelter, clothing and food increased by only 1,290 percent, 607 percent, and 578 percent, respectively, over the same period.

The report authors are also concerned that the current tax bill does not capture the full tax obligations being placed on Canadians, as many provincial governments, as well as the federal government, are funding their spending with deficits, which will need to be paid for with future taxes.

The Canadian government has made significant efforts to control the growth in government deficits over the last two decades. Facing a large fiscal deficit and growing debt in the 1990s, the federal government under then Prime Minister Jean Chretien reduced its spending by 10 percent from 1995 to 1997.

The decline, in the 1990s, in the share of Canada’s GDP made up by government spending is credited by some economists for the improvement in wage growth in recent years, as Canadians saw average wages increase by 10 percent in the 13 years from 1998 to 2011, compared to a gain of only 4 percent in the 17 year period from 1981 to 1998.