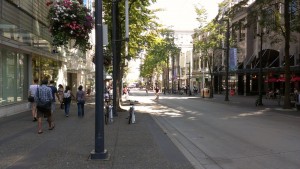 Over a dozen English language schools in downtown Vancouver cater to international students. The government of B.C. is seeking to increase the number of foreign students who choose to study in the province (CICS News)

On Monday, the provincial government of British Columbia, Canada’s westernmost province, unveiled an updated LearnLiveBC website to promote B.C.’s post-secondary institutions to international students and provide foreign students with information on the educational programs available in the province.

As part of the province’s efforts to build upon its strength as a top destination for international students and promote B.C.’s colleges and universities overseas, the LearnLiveBC website will be made available in several languages, including Korean, Portuguese, Japanese and Chinese, over the course of 2013.

The website includes links to resources like the educationplanner.ca site, which catalogues and allows users to digitally search thousands of programs available in B.C.’s post-secondary institutions.

The creation of the LearnLiveBC website is one part of British Columbia’s International Education Strategy which was unveiled in May 2012.