B.C. Magnate Gets One Step Closer to Kitimat Refinery 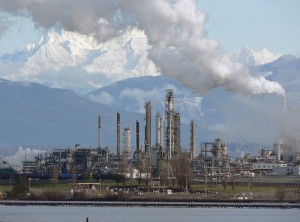 The proposed Kitimat oil refinery would be one of the largest in the world, and would turn bitumen from Alberta’s oil sands region into refined products like gasoline, diesel and jet fuel (Walter Siegmund)

David Black, a British Columbia-based newspaper publisher and billionaire whose idea to raise financing for a refinery in Kitimat was largely dismissed by the oil industry when first proposed last August, saw those plans take a big step toward reality this week with the announcement that a major investment firm was ready to back the project.

Switzerland-based Oppenheimer Investments Group said this week that it is willing to lend the necessary $25 billion to build the mega refinery, which would convert heavy bitumen to light refined products like gasoline, diesel and jet fuel, for export to world markets.

The refinery would reduce the environmental risk of energy products exported from Canada’s Pacific Coast, due to the reduction of bulk of the product, and the fact that refined products are lighter and quicker to dissipate in the event of a spill than the heavy bitumen that would be transported from Alberta.

The refinery would also earn significant revenue by adding value to the raw materials extracted in the Alberta oil sands. Its construction would employ an estimated 6,000 people, and create more than 3,000 permanent jobs once it is up and running.

When Black proposed the project late last year, many pundits and oil industry insiders argued that Canada’s environmental regulations and relative lack of investor interest made the project infeasible, and that it would be easier to build refineries in India or China.

Black says it makes business sense to build the plant in Northern B.C. due to