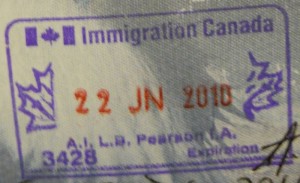 A new survey shows most Canadians welcome immigration, but want limits on the number of immigrants admitted

A new poll conducted by Forum Research for the National Post finds that 70 percent of Canadians favour having limits on the number of immigrants admitted into the country each year.

Average views differed slightly between Canadians of different political affiliations. Conservatives were on the average the most in favour of immigration limits and restrictions, with 76 percent disagreeing that immigrants should be able to bring their extended family to Canada, while 61 percent of Liberals and 59 percent of Greens said the same.

This entry was posted in canadian immigration, public opinion and tagged Canadian views on immigration, Forum Research. Bookmark the permalink.