Canada On Verge of Expansion of Undersea Territory 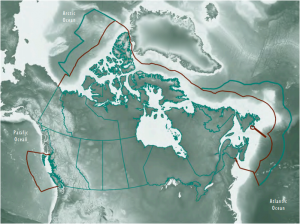 The brown line marks Canada's Exclusive Economic Zone (EEZ), which is an area of continental shelf 200 nautical miles (nm) from a country's coastline over which it has sovereign rights. The green line is an estimate, made in the mid-1990s, of the outer limit of Canada's extended continental shelf. Substantial data collected about the sea floor off of Canada's coasts as part of Canada's Extended Continental Shelf Program have largely confirmed the initial estimates. (Polar Commission of Canada)

The Canadian government is near completion on its application to a UN commission to claim its extended continental shelf, and it holds the potential to expand the country’s ownership over seabed territory by up to 1.75 million square kilometres.

The government must submit the application, which according to the geologist in charge of the project, Dr. Jacob Verhoef, is thousands of pages long and includes 25 scientific reports, before the December 2013 deadline.

The UN Commission on the Limits of the Continental Shelf (CLCS), an expert body established by the United Nations Convention on the Law of the Sea (UNCLOS), will evaluate Canada’s application and render its binding recommendation on the outer limits of Canada’s extended continental shelf.

Canada ratified the UNCLOS treaty in 2003, which grants signatory countries ten years to provide a scientifically defensible submission to the CLCS on the outer limits of their extended continental shelf.

Valuable energy and mineral resources under the seabed are expected to become available to Canada with the expansion of its undersea territory.

This entry was posted in Canada News, Canadian economy and tagged Commission on the Limits of the Continental Shelf (CLCS), United Nations Convention on the Law of the Sea (UNCLOS). Bookmark the permalink.