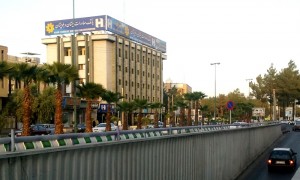 A branch of Bank Saderat in South East Iran. In two rulings over the last week, the EU General Court found there was insufficient evidence that Bank Saderat and Bank Mellat, the two largest private banks in Iran, were involved in Iran’s nuclear program, and ordered the EU sanctions against them to be lifted

According to an article by Jon Matonis in Forbes, the General Court of the EU has ruled that European Union sanctions against two of Iran’s largest private banks, Bank Mellat and Bank Saderat, must be reversed, due to lack of evidence that they are involved in Iran’s nuclear program.

If the ruling stands, it would allow Iranian-Canadians to once again send and receive money to and from family members in Iran using the international banking system.

EU sanctions forced the Society for Worldwide Interbank Financial Telecommunication (SWIFT), headquartered in Brussels, Belgium, to eject Iran from its global financial messaging service, which almost all bank wires around the world use.

It effectively isolated Iranians from the global financial system and prevented Iranian students from receiving money from their parents while studying in Canada, and Iranian-Canadians from sending money to elderly parents in Iran whose pensions have been hit by the devaluation of Iranian currency.

While many in the Iranian diaspora, including in Canada’s Iranian immigrant community, are critical of Iran’s current government and its human rights record, the sanctions against the country have drawn criticism for their unprecedented broadness, and the apparently exceptional treatment Iran is receiving among the world’s countries.

Many see the fact that even countries charged with committing genocide have been allowed to stay in the SWIFT financial network, while Iran was ejected, as evidence of a double standard against Iran, and an attitude that Iranian civilians are acceptable collateral damage to achieve geopolitical aims.

Their claims have been validated by some of the statements made by U.S. political representatives, like Rep. Brad Sherman (D-CA), who wrote in October 2010: “Critics also argued that these measures will hurt the Iranian people. Quite frankly, we need to do just that.”