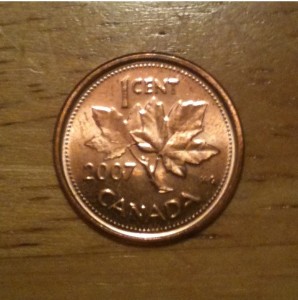 The Canadian penny will continue to circulate and be accepted, but will no longer be provided as change by retailers or produced by the Royal Canadian Mint (CICS News)

The government of Canada ended distribution of the Canadian penny to financial institutions on February 4th, marking the end of the penny’s 155 year history in the country.

The decision came about due to the steady devaluation of the Canadian dollar, which has reduced the face value of the penny to one twentieth of what it was worth when it was first introduced.

Due to this decline in face value, the penny as legal tender is now worth approximately 63 percent of its production cost. This is unlike other denomination coins, on which the Royal Canadian Mint makes money on their sale to financial institutions, due to their face value exceeding the value of their metal content.

The elimination of the penny is expected to reduce government expenses by $11 million a year, and save financial institutions, retailers and consumers approximately $140 million in handling costs.

The smallest denomination coin that will be given in change to consumers by businesses will now be the nickel, with change being rounded to the closest 5 cent increment. Electronic money will still be rounded to one cent increments.

This entry was posted in Canada News, Canadian economy and tagged Canadian penny. Bookmark the permalink.