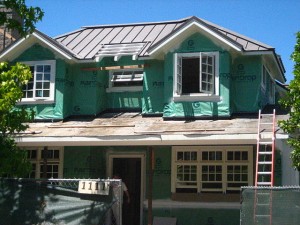 A house under construction in Vancouver, British Columbia. Vancouver saw the biggest increase in the value of building permits issued in April among large Canadian cities

New data shows the value of building permits issued in Canada increasing for a fourth consecutive month, signalling a recovery in the country’s construction sector after a decline in late 2012.

A Statistics Canada report released this week shows that permits worth $7.0 billion were issued in April, 10.5 percent more than in March.

Much of the increase came from an increase in the value of multi-family dwelling residential permits issued, which at $2.1 billion in April, was a staggering 51.9 percent more than in March.

The development is welcome news to the Canadian construction sector, particularly condo builders, which saw a sharp decline in issued permit values, from a peak of $7.5 billion in October 2012 to a low of $5.7 billion in December 2012.

Among the provinces, British Columbia saw the biggest increase in the value of permits issued, reaching $978.3 million in April, 40.4 percent more than in March.