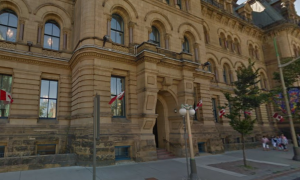 Canadian diplomatic staff belonging to the Professional Association of Foreign Service Officers (PAFSO), a union for foreign service officers employed with the Canadian government, held a picket outside the Prime Minister’s Office on Tuesday to draw attention to their strike.

The dispute is over claims by PAFSO that foreign service officers receive less pay than public servants in similar position in other departments of the federal government.

For example, a foreign service officer on the level-2 pay scale starts out making $65,304 per year, which can increase to up to $82,630 with experience. The Treasury Board has offered to raise the maximum pay for foreign services on the level-2 pay scale to about $87,000. PAFSO says this is still not enough, as it is about $11,000 less than comparatively experienced employees at the same level in the commerce division.

The federal government says that positions in Canada’s foreign service are highly sought after, and earn benefits not available to other public servants, like partial reimbursement for dry cleaning, a vehicle, and an incentive allowance for working outside the country.

PAFSO members say these overseas benefits are available to all federal public servants that work overseas, including those working in federal departments which have employees that receive higher salaries than comparable foreign service officers, so don’t compensate for the pay deficiency of foreign service officers relative to other federal employees.