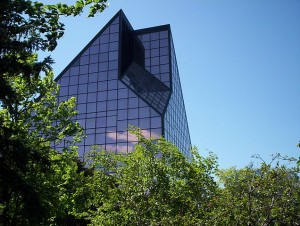 The Winnipeg Royal Canadian Mint, where the circulation coins of Canada and other countries are produced. The Mint hopes to develop a digital replacement for physical coins in the MintChip

The Royal Canadian Mint, a Crown Corporation responsible for minting Canada’s coins, is developing a digital version of the Canadian dollar that it hopes will make digital transactions as easy as cash-based ones.

The technology being developed is called MintChip, and the Mint is describing it as the ‘evolution of currency’. It relies on public-key cryptography and tamper-proof hardware to create non-reversible digital payments that do not require a connection to a third party payment processor like a bank or credit card network to complete.

The technology is not expected to be unhackable, but to keep risks for small-value digital transactions at manageable levels. The Mint says that due to the absence of transaction fees, the chips would also allow micro-transactions as low as 1 cent ($0.01).

The chip is still in the R&D phase, and it’s not known when, if ever, it will be released for public use.

To push the technology along, the Mint held a MintChip Challenge this year that invited software developers to create prototypes of applications of the technology. The competition ended in September with the winning teams being awarded a total of $52,700 worth of .9999 purity gold at a ceremony on October 25th.

While ambitious and seemingly far-fetched, it appears the Mint is quite far along in developing a replacement for physical banknotes and coins. If successful, the MintChip project would make Canada the first country in the world to have digital government-issued cash, giving its economy a leg up in the race to be a globally competitive centre of innovation.