CanadianBusiness: Vancouver Could Be The Next Calgary 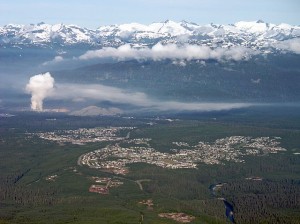 The LNG plant planned in Kitimat, pictured above, is expected to increase natural gas industry revenues in British Columbia, which would benefit the province’s commercial centre, Vancouver

An article appearing in the online edition of last Tuesday’s Canadian Business magazine suggests that Vancouver stands to follow in Calgary’s footsteps and become an energy company magnet:

The management of Canada’s oil and gas industry has become, over the past few decades, ever more concentrated in Calgary. To many, Imperial Oil’s 2005 move from Toronto sealed the deal.

But that pattern is now showing some notable exceptions. Giants of the energy industry are suddenly setting up offices in Vancouver instead, and it looks like they’re here to stay.

Alberta in general and Calgary specifically have for years stood apart in Canada for having the highest per capita GDP, the lowest unemployment rates and the most rapid population growth among all provinces and cities, respectively, in the country.

The source of Alberta’s and by extension Calgary’s wealth has been its large petroleum industry, which has experienced growth in recent years as production in Northern Alberta’s oil sands has increased.

Canadian Business magazine says that newly discovered natural gas fields in northern Alberta and British Columbia, and the planned construction of Liquefied Natural Gas (LNG) conversion and export plants in Kitimat and Prince Rupert in B.C.’s northern coast, have attracted Vancouver the same type of attention from energy companies that Calgary has enjoyed for years:

Not only the terminals but most of the source wells and pipeline infrastructure will be located in B.C., making the provincial government the principal regulator. So it makes sense for companies to run their operations close to Victoria, and even closer to the contractors, suppliers and a potentially hostile public. “You could see B.C. double its natural gas production, and all of that would go toward LNG,” says Greg Kist, vice-president of marketing at Progress Energy. “It indicates that there is going to be significant pace of investment in Vancouver.” Kist expects his company’s West Coast office will in time have 200 employees.

It addition to natural gas production and transport, B.C.’s position in between Alberta and the Pacific Coast makes it an important pathway for oil pipelines, a fact that has spurred Calgary-based Enbridge, which operates the largest pipeline system in the world, to recently decide to open an office in Vancouver.

Immigrants already account for 40 percent of the Greater Vancouver Regional District’s population. If the city experiences an energy boom on the scale of what Calgary has undergone, that would make it all the more alluring to immigrants and Canadians from other regions of the country.

3 Responses to CanadianBusiness: Vancouver Could Be The Next Calgary