Edmonton and Calgary to Have Fastest Economic Growth in Canada 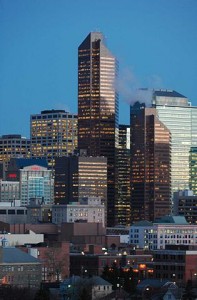 Suncor Energy Centre in Calgary, Alberta. Edmonton and Calgary are expected to have the fastest economic growth in Canada according to the Conference Board of Canada’s Metropolitan Outlook-Autumn 2012 (Chuck Szmurlo)

The Albertan metropolises, Calgary and Edmonton, will have the fastest economic growth in Canada this year, followed closely by Regina, Saskatchewan, according to a forecast by the Conference Board of Canada’s Metropolitan Outlook-Autumn 2012, released today.

Alberta is expected to benefit from high levels of energy-industry-related investment for the next four years, which will help fund economic growth of 3.8 percent in Calgary and 4.6 percent in Edmonton in 2012.

Saskatchewan’s cities, also enjoying a resource-sector-led boom thanks to the province’s large oil and gas, potash, uranium, and lumber resources, will see strong growth over the next four years according to the report. The provincial capital, Regina, is expected to lead the province with economic growth of 3.6 percent in 2012.

Perhaps surprisingly given the city’s real estate slowdown, Vancouver is expected to have one of the best performing economies in Canada in the coming years, with economic growth of 3.1 percent in 2012, and average annual economic growth of 3.3 percent forecast for the next four years.