Canada Ranks 5th in World Ranking of Economic Freedom, US Falls to 18th 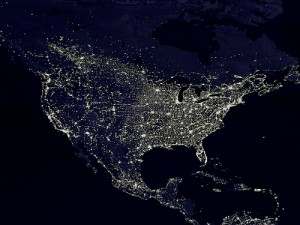 Canada is now ranked as having the freest economy in North America, thirteen places ahead of the United States, the historic symbol of economic freedom in the world (NASA/GSFC)

Canada tied Australia for fifth freest economy in the world in the Fraser Institute’s annual Economic Freedom of the World report, released yesterday. Canada improved its position by one spot while the US saw its ranking drop by ten spots from last year’s index.

The economic data used in the index is from 2010, as that is the most recent comprehensive data available, and comes from external sources like the International Monetary Fund, World Bank, and the World Economic Forum.

For the sixteenth year in a row, Hong Kong and Singapore ranked first and second place in the index. The two East Asian economies have the lowest levels of government spending in the industrialized world, at approximately half that of Canada as a percentage of GDP, and the fewest restrictions on trade, labour and business activities of any of the 144 countries and territories included in the index.

Like most industrialized countries, Canada received a low score in the Size of Government component, ranking 73rd in the world, due to high levels of government spending and high marginal tax rates, but ranked near the top of the index in the areas of Legal System and Property Rights (12th), and Regulation (6th), thanks to a strong rule of law providing secure rights to property, and few regulatory barriers in credit markets and on labour and business activities.

The US’s overall ranking suffered due to an increase in government spending, and a reduction in its scores in the areas of Rule of Law and Freedom to Trade Internationally.

1 Response to Canada Ranks 5th in World Ranking of Economic Freedom, US Falls to 18th