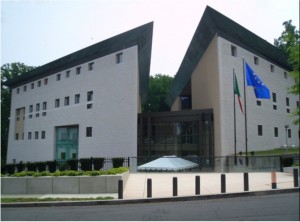 Italian embassy in Tehran, Iran. Italy has announced that it will represent Canada's interests in Iran following the closure of the Canadian embassy in the country. (Google Maps)

Canadian Foreign Minister John Baird, known to be a strong ally of Israel’s hard-line Likud government, said that diplomatic relations with Iran were being cut because “[Iran] routinely threatens the existence of Israel and engages in racist anti-Semitic rhetoric and incitement to genocide”.

Many in the Canadian diplomatic community, including three former Canadian ambassadors to Iran, have criticized the decision however. Kenneth Taylor, who was Canadian ambassador to Iran from 1977 to 1980 and famously helped American diplomats escape Iran during the hostage crisis, said about the move: “I really can’t see the rationale of this move … It’s a very bold stroke to sever diplomatic relations and close the embassy within five days.”

Former Canadian ambassador to Iran from 1972 to 1977, James George, said in an interview with the Globe and Mail that having a Canadian embassy in Iran was important “in defending our citizens who are on death row in Iran, and not have to go through another embassy that has other priorities.”

Mr. George, who is 93, said the move makes a Middle East war more likely: “[the embassy closure] fuels speculation about a possible attack, adds to the tension and the likelihood that something will happen. I think it was the wrong move for that reason.”

John Mundy, who was Canada’s ambassador to Iran until 2007, also weighed in with strong words about the decision:

“This is the first time in decades that a Canadian prime minister, Liberal or Conservative, appears to be advocating approaches that reduce diplomatic opportunities for peace during an international crisis”

Despite the criticism, the move has been received positively by the majority of the Canadian public, with 72 percent of Canadians in a recent Angus Reid survey saying they supported cutting diplomatic ties with Iran.

1 Response to Italy to Represent Canadian Government in Iran