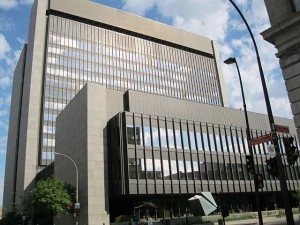 The Palais de justice, a courthouse in Montreal, Canada. Montreal police told an intended target of the scam, Siddharth Kashyap, that there was nothing they could do because no crime had been committed since he had not sent the fraudster money (Jean Gagnon)

According to a report by the CBC, a new fraud is being perpetrated against new Canadians by scam-artists pretending to be lawyers with the Supreme Court of Canada.

The scam involves fraudsters contacting recent immigrants by phone and telling them that they had failed to fill out a form during their immigration application, and were therefore facing charges of immigration fraud that would result in their deportation.

The scam-artists then tell the intended victims that their court hearing had already been scheduled in Ottawa in a few days, and that before the court hearing, they would have to travel to India and fill out the form they had missed before, or wire money to a lawyer at the Canadian consulate in India to do it for them, or face conviction for immigration fraud and eventual deportation.

After one of the intended targets, Siddharth Kashyap, reported the fraud attempt to the Montreal police, they told him that since he hadn’t sent money, no crime had been committed, and there was nothing they could do.

The number given by the scam-artist was based out of Colorado. A recording of a call to the fraud perpetrator by a CBC reporter posing as a scam target can be heard here.

This entry was posted in immigrants and tagged immigration fraud. Bookmark the permalink.