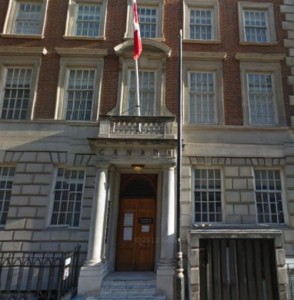 Foreign service staff have been reduced at 15 Canadian visa offices overseas, including the High Commission of Canada to the United Kingdom, pictured above (GOOGLE MAPS)

The Professional Association of Foreign Service Officers (PAFSO), the union for Canadian diplomats, has withdrawn some of its members from the 15 largest foreign Canadian visa processing centres in order to pressure the government to come to a deal on their pay dispute.

Talks between PAFSO and the federal government broke down after PAFSO rejected the government’s offer to enter into binding arbitration on the condition that PAFSO agree that one of its main arguments would not be considered during arbitration.

The argument the Treasury Board wanted to be left unconsidered is the claim that foreign service officers are paid lower salaries than public servants working in similar positions in other divisions of the federal government.

The federal government says that since foreign service officers receive a foreign-living allowance, and the positions are highly sought after by Canadians, the deal it has offered is fair to both the union and the rest of the Canadian population which has to pay for their salaries.

The government also sees the use of a strike as an attempt to blackmail the government by withholding an economically vital service, and is reluctant to reward the strike with concessions.

For its part, PAFSO says that it has been left with no choice but to strike as the government has refused to enter into binding arbitration without unreasonable preconditions, and that the cost of meeting its demands would cost Canada only $4.2 million, which is much less than what it says is hundreds of millions of dollars in lost tourism and foreign study income that has resulted from the strike.