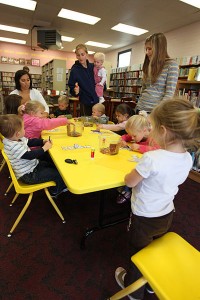 Children in preschool. The HIPPY Canada program provides parents with limited education and/or income, and with pre-school aged children with counselling on preparing their child for school

Citizenship and Immigration Canada (CIC) announced it would provide $2.6 million to the Home Instruction for Parents of Preschool Youngsters (HIPPY) Program on Wednesday, saying that the funding will help new immigrants integrate more quickly after arriving in Canada.

an evidenced-based program that works with families in the home to support parents, primarily mothers, in their critical role as their child’s first and most important teacher. HIPPY strengthens families and communities by empowering mothers to actively prepare their children for success in school.

Over the past 13 years, HIPPY Canada has reached out to provide more than 6,000 low-income newcomer, Aboriginal and other Canadian mothers with structured lessons and practical information that develop their own and their child’s personal skills, ensuring both children and families a better opportunity to succeed in school and society.

In Canada, HIPPY’s efforts to measure results, combined with more than 20 years of research in the United States and eight other countries, have proven the benefits of the program for children, mothers, families and communities.

“Though programs like HIPPY, our government is giving newcomers the best chance possible to integrate into Canada and contribute to a prosperous society. The government has had a strong affiliation with the HIPPY Program for many years and is proud to help immigrant parents in their vital role as their child’s first and most important teacher.”

CIC will spend about $600 million this year on settlement services for new immigrants, up for $200 million in 2005-06. The funding is motivated in part by the federal government’s mission to improve immigrant integration in order to reverse the growing income and unemployment gap between new immigrants and other Canadians.

This entry was posted in canadian immigration, Citizenship and Immigration Canada and tagged Home Instruction for Parents of Preschool Youngsters (HIPPY) Program Canada. Bookmark the permalink.