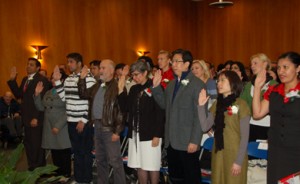 New Canadians taking their Citizenship Oath. After nearly one year, the Federal Skilled Worker Program opened to new applications on May 4 with a set of changes to the applicant assessment process (Citizenship and Immigration Canada)

The federal government began accepting Federal Skilled Worker (FSW) applications on Saturday, marking an end to a nearly one year moratorium on the skilled worker program.

The annual reset of the program’s quota was scheduled for July 1 2012, but was postponed due to a backlog of FSW applications that Citizenship and Immigration Canada (CIC) said it needed to work through, and to give CIC time to make changes it said were needed to make the program better meet Canada’s economic needs.

The new annual quota for the FSWP is set at 5,000 applications, which is less than the 10,000 application cap of 2012, and is expected to be filled quickly as immigration hopefuls rush to apply after a years-long wait. The 5,000 applications accepted are expected to represent about 12,500 people as they will include spouses and dependents of principal applicants.

Citizenship and Immigration Minister Jason Kenney promoted the goals of the program changes on Friday, saying they would benefit Canada:

“The government’s number one priority remains jobs, economic growth and long-term prosperity. Our changes ensure not only that Canada can select the immigrants most needed by our economy, but that they are best positioned for success.”

These changes include a greater weight placed on English or French language ability, applicants of a younger age, and Canadian work experience, in assessments of FSW applicants. The changes were made after research and consultations to find the factors that most often accompanied successful economic integration and employment by immigrants.

The program has also introduced a requirement for applicants to provide Educational Credential Assessements (ECAs) for credentials earned outside of Canada, provided from one of three organizations designated to provide ECAs.