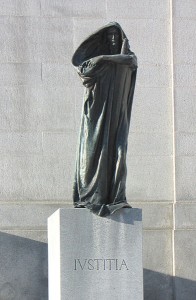 Statue of Justicia in Ottawa Canada. New legal provisions in Bill C-35 allow government agencies to share information on professional misconduct by immigration representatives with governing bodies that license and regulate them.

Rules in place since April 10th give Citizenship and Immigration Canada (CIC), the Canada Border Services Agency (CBSA) and the Immigration and Refugee Board (IRB) the legal authority to share information on professional misconduct by immigration representatives with governing bodies.

CIC regularly receives complaints and tips from the public about unethical or illegal conduct by immigration representatives, but until the April 10th operation bulletin that implemented the information-sharing provisions of Bill C-35, has not had the authority to share that information with governing bodies like the Immigration Consultants of Canada Regulatory Council (ICCRC), which licenses and regulates immigration consultants.

Examples of the type of conduct that government agencies can now share allegations or evidence of are: