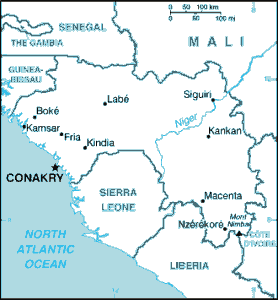 Soumah, who was deported back to the West African country of Guinea this year, is appealing the deportation order based on the results of a new paternity test that his lawyer says shows he did not lie about not having a dependent (CIA)

A Guinean man who was deported from Canada after his Canadian wife and sponsor for permanent residence alleged that he lied to her about a child he had fathered and walked out on her three weeks after arriving in Canada has married another Canadian woman, it has emerged.

Lainie Towell married Fode Mohamed Soumah, a native of Guinea and ten years her junior, and sponsored him for immigration to Canada in 2007. Soon afterward, Towell learned in a phone call from a mutual friend in Guinea that Soumah had fathered a child with a 15 year old girl in his home country. She also discovered emails that Soumah had sent to his friends that led her to believe that Soumah was the baby’s father.

The Immigration and Refugee Board agreed with Towell and ordered Soumah deported in 2009 for not having declared his dependent to Towell during his application for permanent residence. In February 2012, after three years of appeals, Soumah was deported from Canada.

The new development in this story is Soumah’s marriage to another Canadian woman, Cassandre Blier, who he met 16 months after his marriage with Towell ended.

Blier and Soumah filed a lawsuit on July 23rd seeking to ban the publication of Towell’s book about the events, How to Catch an African Chicken: A Canadian Woman’s Outrageous but True Story of Marriage Fraud. A Superior Court of Québec justice ordered the sale and marketing of the book halted for 30 days to prevent potential damage to Soumah’s reputation.

The lawyer representing the married couple in the suit, Denis Roumestan, says that a paternity test proves with 100 percent certainty that Soumah is not the father of the child. He also said that Soumah is appealing the deportation order in light of the paternity test.

Towell is not backing down, insisting her book is an accurate account of events, and says she feels sorry for Soumah’s new wife and believes she is a victim.

This entry was posted in family class, spousal sponsorship and tagged spousal visa. Bookmark the permalink.