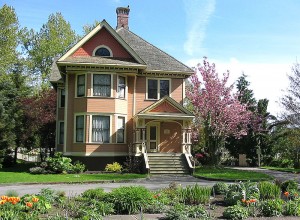 A house in Greater Vancouver, Canada. A report by the National Bank of Canada says the effects of immigration on demographics will keep housing prices in Canada from falling (Tony Fox, GFLD)

A new economic analysis credits immigration for keeping Canada’s housing sector growing amid a slowdown in the developed economies.

As reported by the Globe and Mail, a National Bank of Canada (NBC) report on the Canadian housing market finds that the so-called ‘household forming cohort’, which is the segment of the population aged 20-44, is growing much faster in Canada than in most developed countries.

Without the influx of 147,000 new Canadians aged 20-44 through immigration, the demographic would have seen a decline in 2012, according to NBC senior economist and report author, Matthieu Arseneau. The average growth rate of the 20-44 demographic was negative 0.3 percent last year among the rest of the developed economies, compared to the positive 1.1 percent growth rate seen in Canada.

Arseneau cites a high rate of employment among foreign born Canadian citizens, which is lower than only New Zealand and Norway’s, as a pull attracting foreigners to immigrate to Canada.

The report projects the growth in Canada’s 20-44 cohort will decrease after 2013, but will remain positive, and will exceed that of other developed countries. This demographic trend, Arseneau argues, will provide the country’s housing market with a comparative advantage over those in other developed countries, and reduce the likelihood of a crash in Canadian housing prices as predicted by some market watchers.