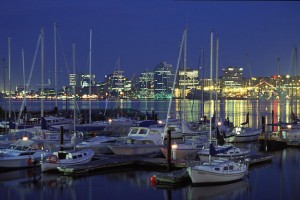 Halifax harbour at night. Nova Scotia’s premier is hoping to boost the province’s economy by inviting more skilled immigrants to the province and encouraging them to settle

Nova Scotia, one of Canada’s Maritime provinces, is seeking to increase the number of skilled immigrants that settle in the province, according to a new provincial strategy announced earlier this year.

The Maritimes region of Canada, which includes Nova Scotia, has suffered from chronic economic malaise over the last two decades, with the highest unemployment rates, the fastest aging population, and the lowest population growth rates of any region in the country.

Attracting skilled immigrants is seen as one way to address the critical skills shortage facing the region and reversing the looming population contraction.

The use of immigrants and temporary foreign workers by the Maritime provinces to meet labour shortages has met some controversy however, as the region has the largest pool of unemployed workers in the country relative to its population.

Reforms by the federal government to the Employment Insurance system in 2012 were designed in part to reduce the reliance of seasonal workers in resource sectors in the Maritimes on EI for the portion of the year when they’re off work, in order to encourage more of the region’s population to work year round.

Still, the governments of the Maritime provinces continue to insist that skilled immigrants are an important tool for alleviating their demographic problems and bringing economic vitality to the region.

Nova Scotia has been pressing the federal government in recent years to increase the number of immigrants it allows it to nominate annually through the Nova Scotia Nominee Program (NSNP), and as a result has seen its cap increase by 200 nominees, to a total of 700, in 2012.

The increase in its cap is not as fast as the provincial government would like, so it has been looking for ways to maximize the number of nominations it has available to it.

In a strategy announcement published in late February, the Nova Scotia government said that the international graduate stream of the NSNP would be eliminated, and foreign graduates seeking to apply for permanent residency through it would be redirected to the post-graduate stream of the federal Canadian Experience Class (CEC).

The province says this will allow it to nominate more skilled workers using the spots freed up by moving the foreign graduate nominees to the federal program, and increase the total number of immigrants it invites to the province.

The Nova Scotia government also notes that skilled worker nominees are more likely to bring their families to Canada with them, thereby further increasing the population boost that the redirection of international graduates to the CEC will provide to the province.

3 Responses to Nova Scotia Looking to Increase Immigration to Province