Poll Places Canada as Best Place to be a Woman 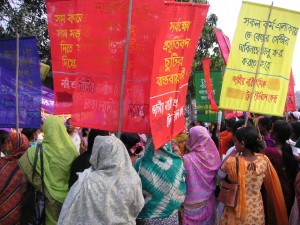 A women's day rally in Bangledash

In a poll of 370 gender specialists conducted by Trustlaw, Canada was perceived to be the best G20 country to be a woman, and India the worst.

Factors that put Canada on top include government-guaranteed health care, the fact that 62 percent of university graduates and one third of federally appointed judges are women, and the figure of 75 percent of 15-49 year old females using contraceptives.

Saudi Arabia and India were placed second to last and last, respectively, due to perceived legal discrimination and inadequate protection of rights.

Violence toward women, high rates of child marriage, and a relatively high mortality rate for women during child birth resulted in India’s last place showing, while Saudi Arabia, with higher levels of education and better maternal health outcomes than the much poorer India, received a low ranking due primarily to women’s legal disadvantages in the country like being prohibited from driving and their testimony being given half as much worth as a man’s in court.