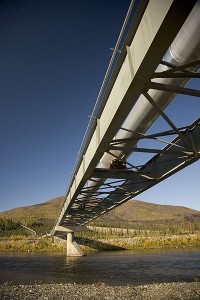 A comprehensive report on the challenges and opportunities of Canada’s oil sands by auditing giant Deloitte projects that the hydrocarbon deposits will contribute an estimated $2.1 trillion to Canada’s GDP over the next 25 years.

The economic benefits of the added wealth include up to $783 billion in extra tax revenues over the period, which will provide a significant boost to local, provincial and federal governments and help them meet the growing costs of providing social services to an ageing population.

In addition to tax revenue, the export revenue generated from oil sands production will fund up to 905,000 jobs a year according to the Deloitte report.

The report cites lack of pipeline infrastructure as a potential limiting factor in the growth of Canada’s energy exports, as oil production is expected to reach current pipeline capacity by 2017.

Oil producers are currently look to use alternative transportation methods, in particular rail transport, to move the oil to international markets once pipeline capacity has been reached, but these solutions are expensive and inefficient in the long run, and the report says more efficient pipeline transportation will be required to fully realize the oil sands’ potential.

The report mentions the Northern Gateway pipeline, the Keystone XL pipeline and the Trans Mountain Expansion (TMX) as three pending infrastructure projects that are critical for providing sufficient conduits for getting Canada’s oil sands production to world markets.

According to Deloitte, the benefits of completing these projects include: 1) reducing up to $131 billions in losses that are currently incurred from Canadian oil being sold at below market prices due to lack of access to world markets, 2) reducing over-reliance on the US market, and 3) getting access to the fastest growing oil consuming regions of the world in India and China.

The biggest challenge in the oil sands development according to the report is the poor public perception of the oil industry in Canada and the hyperbolic nature of the debate surrounding the potential environmental harm of oil pipelines. The report urges a more fact-based debate on the costs and benefits of pipeline construction that avoids broad generalizations and sweeping judgements about environmental criticism, the oil industry, and energy projects.