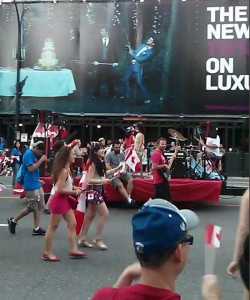 Canadians at a parade in Vancouver. Canada has ranked first in the world in the last three RepTrak global surveys on country reputations (CICS News)

A new study on national reputations, called RepTrak, finds Canada has the best reputation of any country in the world. It’s the third year in a row that Canada has taken the top stop in the annual survey.

“Canada’s results confirm that it is only possible to maintain a strong reputation in the long-term when a country has the ability to transmit its leadership globally in each of the three key criteria: an effective government, an advanced economy, and an appealing environment.”

“A country’s reputation is its personal calling card,” said the President and CEO of the Canadian Tourism Commission (CTC), Michele McKenzie.

She added, “We’re not just inviting the world to visit us; we’re capitalizing on our positive reputation to open new doors and create new opportunities for Canada, such as the impact of the business events travel sector on our economy.”

The different components of reputation measured in the survey were levels of trust, esteem, admiration and respect, and perceptions of 16 attributes of a country, including whether it is a safe place to visit, a beautiful country, has friendly and welcoming residents, has progressive social and economic policies, and is run by an effective government.

This survey found many non-G8 countries had improving reputations, led by Singapore, Taiwan, Peru, Brazil, South Korea, Poland and the Ukraine, which as a group saw an average increase of 5.3 points in their reputation score from 2009 to 2013, which helped them gain ground against the five top countries, which had a smaller 3.5 point increase in their score over the same time frame.

The Reputation Institute says the survey shows a correlation between country reputations and the economic situation of countries, which explains the faster rate of improvement in the reputation of developing countries.