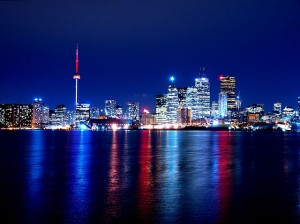 Toronto leads all Canadian cities with a score of 20.6 points in the most recent CWM Metropolitan Economic Activity Index, which rates the economic activity of Canadian cities according to nine economic variables selected by CIBC’s World Markets subsidiary.

While Toronto did not lead other major Canadian cities in any of the nine areas of economic activity, it consistently ranked near the top in most of the categories, providing it with the highest cumulative score.

Toronto’s manufacturing sector benefited from an increase in automobile purchases in the United States as that country experienced an economic recovery, and an expansion of its construction industry, as housing starts, led by condominium construction, unexpectedly grew in the city.

Trailing Toronto in the top six Canadian cities were the Prairie metropolises of Calgary, Regina, Winnipeg, Saskatoon, and Edmonton in descending rank.

Calgary, coming second with a score of 19.5 points, continued to benefit from having one of the lowest unemployment rates, highest home sales growth rates, and highest population growth rates of Canadian metropolises.