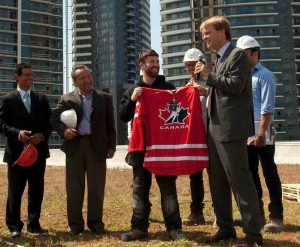 New Canadian Citizenship and Immigration Minister Chris Alexander this month welcomed Eric Byrne, a Canadian immigrant from Ireland, and one of the first individuals to become a permanent resident of the country through the Federal Skilled Trades Program (FSTP), in a press conference to promote the new immigration program.

Byrne met the FSTP’s first requirement, a Certificate of Qualification from a provincial trades authority – in his case the Ontario College of Trades – in May 2012, and is currently employed as a plumber for University Plumbing and Heating.

The reciprocal visa program allows the young adults of countries that Canada has a working holiday agreement with, like Ireland, to work and live in the Canada for a period of one to two years, while Canadian youth are given the same opportunity in the contracting country.

The program grants a maximum of 6,350 two year working holiday visas to Irish permanent residents and citizens per year. The visas have become highly sought after in Ireland, with the annual quota being met just two days after the program began accepting applications in 2013.

The increasing reliance on the International Experience Canada program, the Canadian Experience Class (CEC), and new immigration programs that target foreign nationals with skills in demand in Canada, like the FSTP, for selecting new immigrants, began during Jason Kenney’s tenure as Citizenship and Immigration minister.

The aim of this new direction in immigration selection is to reverse the trend seen of highly educated immigrants arriving in Canada and having difficulty integrating into the economy, resulting in a growing employment and income gap between new immigrants and the general population.

By choosing applicants from countries more similar in language and economic structure to Canada, those who have Canadian work experience, and those who are certified to work in their vocation in Canada, the immigration ministry hopes new immigrants can immediately start contributing to the Canadian economy at the same rates as native born Canadians.

For his part, Kenney, who is now the Minister of Employment and Social Development, welcomed another one of the first successful applicants of the FSTP, Paul Lyttle, who is working as an electrician for Calgary-based Unitech Electrical Contracting Inc.

He promoted the program as a positive for the Canadian economy.

“The new Federal Skilled Trades Program is a significant improvement to Canada’s immigration system which, for too long, had not been open to in-demand skilled workers. Immigrants like Paul are set for success and I am pleased that this new Program will enable him, and others like him, to contribute skills to our economy on a permanent basis,” he said.