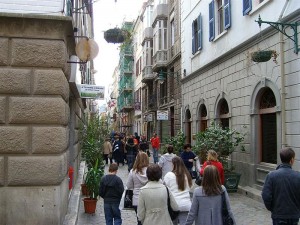 According to the National Post, Citizenship and Immigration Canada (CIC)’s 2013 quota of 6,350 work permits for Irish passport holders filled up in two days this month:

“It’s staggering; we all knew that the demand was going to be very high this year, but I don’t think anybody anticipated this,” said Cathy Murphy, executive director of the Toronto-based Irish Canadian Immigration Centre.

She called the surge in demand a sign of the “desperation of young people to get out.”

Last year, by contrast, it took Canada’s Irish embassy five months to hand out only 5,350 visas.

The International Experience Canada (IEC) program grants work permits, informally called ‘working holiday’ visas, of a duration of one to two years to young adults in participating countries. The program is reciprocal, with Canadian youth, usually defined as those 18-30 years of age, being eligible for working holiday visas in the counterpart country.

The duration of Canada’s working holiday visa for Irish youth, which was previously one year, but for up to two separate visas, was also changed to a single two year visa, to make it easier for those working in Canada, as the change means they’re no longer required to disrupt their work schedule and leave Canada to re-apply for their second working holiday visa.

The moves were intended to attract more individuals from a group that is seen to quickly integrate into Canadian life and has the English language proficiency and the types of skills required in Canada’s economy, particularly in the skilled trades.

What was unexpected was how sought after the working holiday spots would be among young adults in Ireland.

The exploding demand for Canadian visas among Irish nationals likely stems from ongoing economic hardships in the EU that have been particularly pronounced in Ireland, as well as a media campaign by Citizenship and Immigration Minister Jason Kenney to promote Canada to the Irish, including an appearance on an Irish TV show last year.