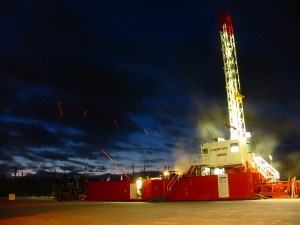 An oil rig in Northern British Columbia. The oil and gas industry is vital to the economy of Western Canadian provinces

The sizeable contribution made by the oil and gas sector to Canada’s export revenue helped shore up the value of the Canadian dollar, which enhanced Canadians’ purchasing power internationally and helped raise the average household wealth of Canadians above that of Americans for the first time in history.

Canada’s natural resource wealth, in particular in energy resources, has also given it the best economic performance among the G8 countries over the last several years, and allowed it to better weather the economic decline following the bursting of the global credit bubble in 2008.

The exceptionalism of Canada among the developed world faces a threat from an unexpected source though: increasing shale oil production in the US.

Thanks to such innovations as horizontal drilling and fracking (hydraulic fracturing), the U.S. is currently producing more oil than it has in 20 years. U.S. output now exceeds seven million barrels a day, and that has enabled the world’s biggest oil consuming nation to cut its imports to the lowest level in 16 years.

Since Canada’s crude oil exports are a critical driver of well-paid jobs, royalties, taxes — and ultimately, federal equalization transfers — that’s something that should alarm all Canadians.

Indeed, if current trends continue, the U.S. will overtake Saudi Arabia as the world’s top oil producer by 2017, the International Energy Agency has predicted.

The regional effects could be alleviated with the construction of more pipelines capable of transporting the oil produced in the Athabasca oil sands in Northern Alberta to the Pacific Ocean, from where it can be shipped to Asian economies, but projects being proposed at the moment, like the Enbridge pipeline, face political challenges due to ideological and cultural opposition to the oil industry among a sizeable section of the Canadian public.

If the global petroleum market progresses as the PwC report predicts, the prosperity of Canada’s Western provinces, which depends to a large part on energy production, would diminish, and federal revenues from oil and gas royalties would decline.

The rapid immigration of skilled trades people to Canada to work in the oil and gas sector would slow, and other developed countries, especially large oil importers like European countries and Japan, would become more attractive destinations for immigrants and international investors.

The net effect for the world would likely be positive, as reduced oil prices increase global economic growth and raise the average of standard of living around the world.