Citizenship Application Process to Get Easier With Test Re-Takes 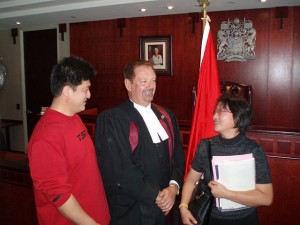 New Canadian citizens at the Oath of Citizenship ceremony. New rules will allow citizenship applicants who fail their citizenship knowledge test to re-take the test a few weeks later

According to an announcement made on Monday, Citizenship and Immigration Canada (CIC) has begun providing permanent residents who take their citizenship test their results immediately, and if they fail, allowing them to book another test a few weeks later.

The previous rules required a citizenship applicant who failed the citizenship knowledge test to wait months to have an interview with a citizenship judge who would then decide if they would be granted citizenship.

The new rules will also apply to applicants who are currently waiting to see a citizenship judge due to having failed their knowledge test, allowing them to take their test in weeks and obtain citizenship.

The previous rules required all members of a family to obtain their citizenship together, which prevented some individuals who otherwise qualified for citizenship to have to wait because the citizenship application of one member of their family was not approved.

The two new measures are expected to speed up the citizenship acquisition process.

Approximately 200,000 people become Canadian citizens each year, which is about two-thirds of the number who receive permanent residency.

The percentage of citizenship test takers who failed their exam nearly quadrupled from 2009 to 2011 due to a March 2010 change that raised the passing grade of the test and increased the number of topics it covered.