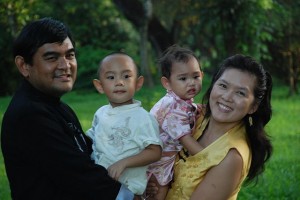 A Filipino family. Filipinos have the highest employment rate of any ethnicity in Canada, and are now the largest group of new immigrants in Canada (Henry Lopez)

Immigrants from the Philippines bucked the trend, with the highest employment rate of any ethnicity in Canada, at 85.6 percent.

The Philippines has also recently become the largest source of immigrants for Canada, contributing 13 percent of the new immigrant population in 2011, ahead of India (10.8 percent) and China (10.8 percent), which will likely alleviate the immigrant-Canadian-born employment gap in the coming years.

Immigrant employment rates varied across the provinces, with Quebec having the worst rates, and Alberta and Manitoba the best.

The employment gap between the Canadian born and immigrants was lowest in the Atlantic region (0.8 percentage points), but the region’s immigrant employment rate was well below the leaders, Alberta and Manitoba, where the overall employment situation is much better and immigrants are employed at rates of 82.5 and 82.3 percent.

Canada’s most populous province, Ontario, had a below-average immigrant employment rate of 75.4 percent, significantly lower than that of its Canadian born population of 83.3 percent.

The poor showing of Ontario could be partially due to the declining proportion of the province’s immigrant population who are ‘economic immigrants’, meaning those admitted through a skilled worker or investor immigration program, as opposed to family re-unification and refugee programs.

While approximately 52 percent of Ontario’s immigrants are economic immigrants, the average across Canada is 70 percent, a proportion that Ontario’s provincial government wants the province to match.

Previous analyses done by Citizenship and Immigration Canada (CIC) have found that proficiency in French or English is among the best predictors of employment and economic success for immigrants, so these findings are not surprising.

To improve the economic performance of those admitted to Canada, CIC is increasing the language requirements for the Federal Skilled Worker Program, which is scheduled to resume in early 2013.