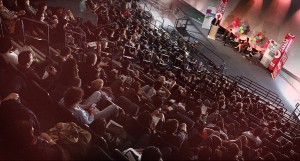 The Startup Canada National Tour at its finale in Vancouver. The tour took Startup Canada to 40 Canadian cities where it consulted with over 20,000 people over six months (Cyprian Szalankiewicz)

The action plan is the product of the Start-Up Canada National Tour which took the organization across the country from May to September 2012 and solicited input from over 20,000 entrepreneurs in 40 cities on how to create a national entrepreneur brand and foster Canada’s start-ups.

Startup Canada is looking to launch the initiatives, including the Startup Canada Connect online social network, by May 2013, and is seeking to finance them through corporate sponsorships and crowd-funding.

The organization launched its crowd-funding campaign on Tuesday through the Indiegogo platform: http://www.indiegogo.com/startupcanada and is looking to raise $100,000 in 34 days.

The action plan has been promoted by several federal officials, including Minister of State Small Business and Tourism Maxime Bernier, who spoke at an organization event in Montreal, and Industry Minister Tony Clement who was a speaker at an event in Ottawa, in Tuesday’s kick-off for the Startup Canada blue-print.