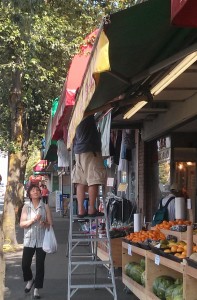 Many temporary foreign workers are employed by immigrant-run businesses like the above, and data from Citizenship and Immigration Canada shows that the majority are men (CICS News)

The gender makeup of Canada’s foreign worker population is like that of foreign workers around the world, with men outnumbering women by a large margin.

The data, collected by Citizenship and Immigration Canada (CIC), shows that over 143,000 men entered the country in 2012 as temporary foreign workers (TFWs), over double the approximately 70,000 TFWs who were women.

Men, who are the primary breadwinner in most households around the world, are often driven to work abroad by pressure to provide for their families, when wages in their own country are inadequate.

A recent MacLean’s story on outgoing foreign remittance from individuals in Canada reports that the country has the highest foreign remittance rate in the world, at $667.57 per capita, suggesting that many of these TFWs are in fact sending the money they earn in Canada to family living in their country of origin.

The CIC data also points to male and female TFWs tending to work in different types of occupations. While 75 percent of male TFWs worked in occupations that have well defined skill levels (e.g. managerial, professional, skilled and technical), only 40 percent of female TFWs did the same.

Six out of ten female TFWs were categorized as working in occupations where the skill level was not stated, which usually either means an individual is a family member of a foreign worker, or they are working in an unskilled occupation.