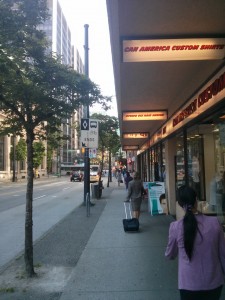 A downtown Vancouver sidewalk. The portion of new Canadian immigrants that settled in Vancouver declined from 13.7 percent in 2006 to 13.3 percent in 2011 as Canada’s smaller cities, particularly in the prairies, attracted newcomers with their strong labour markets (CICS News)

Excluding the Big Three, the cities drawing the most newcomers were those with the most promising job markets: Calgary, at 6.1 percent of all new immigrants, Edmonton (4.3 percent), and Winnipeg (3.9 percent).

The oil wealth of Alberta has contributed to the province having the lowest unemployment rate and the highest per capita GDP in the country, making the immigration shift to that province’s cities unsurprising.

Another factor contributing to the shift to cities other than the Big Three is the Provincial Nominee Programs (PNPs), which provide those hoping to immigrate to Canada with new routes to immigrate if they are able to acquire eligible work experience in a province.

Some PNPs, like the Manitoba Provincial Nominee Program (MPNP), have a lower work experience threshold for eligibility and are granted a higher quota by the federal government for the number of foreign nationals they can nominate for permanent residence annually, and this has resulted in a boost in the number of immigrants settling in their corresponding provinces.