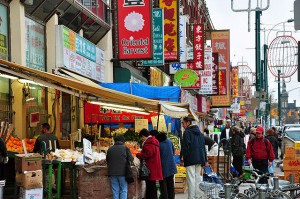 Chinatown in Toronto. A growing visible minority proportion has coincided with a decline in the crime rate in Toronto. (chensiyuan)

One study referenced, conducted by researchers Ronit Dinovitzer and Ron Levi at the University of Toronto, compared the rate of youth delinquency in a group of 900 teenagers, 66 percent of whom were non-European immigrants, in a Toronto community in 1999, to the rate found in a group of 835 teenagers in the same community, but twenty three years earlier, when only 10 percent of respondents came from an immigrant background.

The findings show a significantly lower rate of youth delinquency, which includes activities like smoking marijuana, getting into fights and stealing cars, in the newer cohort of teenagers over the older, less ethnically diverse cohort.

Another finding by Statistics Canada shows a strong negative correlation between the rate of violent crime in Montréal neighbourhoods, and the proportion of the neighborhood’s population that is made up of recent immigrants.

The more general correlation that advocates of the ‘immigration reducing crime’ theory point to is the nation-wide decline in the crime rate since the 1970s, when immigration levels were significantly increased by the Trudeau government and maintained by governments since. Major Canadian cities like Toronto have seen their crime rates decline by up to 50 percent since 1991, as their proportion of foreign born residents, now at 50 percent in Toronto, has increased.