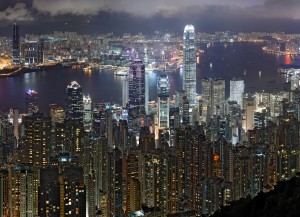 Many Canadians of Hong Kong origin find they can earn and save more in the South East Asian metropolis, which has one of the lowest tax rates in the world, than in Canada (Samuel Louie)

A story in Saturday’s Vancouver Sun reports that an increasing number of Canadian citizenship of Hong Kong origin are moving back to the South East Asian city, according to demographic data:

Statistics Canada’s numbers tell the tale. Despite Canada’s rapid population growth in the past 15 years, there are now 32,000 fewer Hong Kong-born residents in Canada than there were in 1996.

The 2011 National Household Survey, released last week, shows 209,000 Hong Kong-born residents in Canada (about one third of them living in Metro Vancouver). That compares to 241,000 who lived here in 1996.

Their total numbers in Canada have been dropping despite 1,000 to 2,000 new Hong Kong immigrants a year continuing to trickle in. Even accounting for deaths, it is clear that thousands of Hong Kong citizens each year have been leaving Canada.

The draw, according to Vancouver Sun columnist Douglas Todd, is money, which they can earn more of in Hong Kong, and family, who they seek to reunite with.

Hong Kong’s steady economic growth over the last three decades and vibrant free market have given it a better income-earning potential for some professions than Canada, making it a preferred place to live for some Canadian citizens, like Edward Shen:

“(In Hong Kong) I am perhaps working about 60 to 70 per cent of what I was in Vancouver, but saving up more than I used to, given the much lower tax rate (17 per cent flat tax),” Shen wrote in an email.

“Most Hong Kong people know that there is no big money to be made in Canada, even less so in Vancouver. Vancouver in many people’s eyes is a place for retirement of rich people, as they find the living standard in Vancouver very high. Which is true. People who want to make money choose Toronto over Vancouver.”

Hong Kong has a top marginal income tax rate of 17 percent and no capital gains tax.

Todd also suggests that many of the Hong Kong nationals only immigrated to Canada to acquire Canadian citizenship, with no intention of staying long-term, and points to a recent study conducted by the Citizenship and Immigration Canada funded Metropolis research body which found that some Chinese immigrants describe the three year residency requirement for becoming a Canadian citizen as “immigration prison”, which they must endure before they can repatriate back to their home country.

These repatriates are a new type of “international class of citizens”, according to Richard Kurkland, an immigration lawyer interviewed for the story. They are well-off, and like to have the mobility and insurance of having citizenship in more than one country.